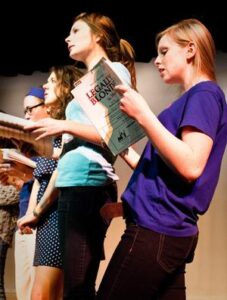 somewhere between ten and fifteen individual shows for the public. The winter season always includes an offering at the Massachusetts High School Drama Guild festival.

The 4WPs have won numerous awards for performance and technical theatre work, and represented NHS at the semi-finals of the festival for nine of the past ten years. In that time the 4WPs have also represented the school at the state finals on four occasions and have represented Massachusetts at the New England festival. These past four years they were invited to represent the USA at the renowned Edinburgh Fringe festival in Scotland. 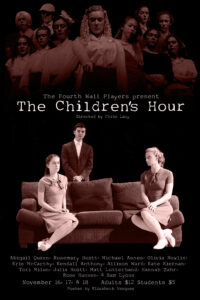 4WP alumni are now scattered across the country and have graduated from some of the nation’s finest acting schools. Some are now working professionally.  Despite their busy lives, many of them often manage to return to NHS for the latest 4WP offering.  Many past and present 4WPs have become a close-knit family and stay in regular contact with each other. The camaraderie and collegiality among them bear witness to the personal, social, academic and professional benefits bestowed by membership of the group.

Chris Lacy was a lawyer for ten years before turning to academic administration and teaching some twenty-eight years ago. He has been directing high school theatre for most of that time and this year will celebrate his twelfth year at the helm of the 4WPs and will direct his 60th play at NHS. He is a member of the Massachusetts Drama Guild’s executive council and chairman of the playwriting committee. He is a life member of the Guild.